A Lesson in Shadow Warfare by Mark Hatmaker 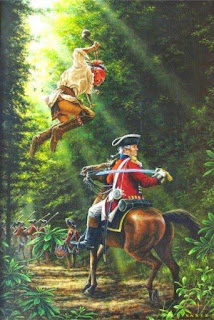 The evocative painting “Ambush” by the excellent artist Dan Nance conjures images of the French and Indian War[s], the Revolutionary War, Roger’s Rangers, Simon Girty, James Fenimore Cooper novels, and Mel Gibson at his vengeful best in The Patriot.


The dramatic incident portrayed in the painting is romanticized but myriad such skirmishes did indeed occur, are well-documented and the ingenuity, and let’s face it, brutality are front and center of these accounts.


Let’s use Nance’s painting as a jumping off point regarding an aspect of American Indian skulking warfare, and like tactics adopted by white settlers who adopted “savage” ways.


First, the talented Mr. Nance portrays our ambushing warrior attacking from high and above with tomahawk in hand. This aspect of the painting hews close to many accounts of “from above” ambushes.


What does not hold true is the direction of the attack.


First, let’s absolve the artist-Mr. Nance is displaying creative license in his use of lighting. But we use the inaccurate painting for our lesson all the same.


Native warriors and woodsmen who went native were skilled and schooled in the ways of skulking, that is, stealthy movement. Positioning themselves high with the sun to their backs would allow their shadow to fall upon the trail giving away their position. If not their shadow at least a tell-tale break in the foliage shadow or unforeseen movement in the shadow ruining the ambush.


The “high and above” ambush on sunny days would always be executed from the opposite side of the trail where the sun would not give away the awaiting warrior.


To a large degree this is an opposite tactic to low-ambushes where we place the sun to our backs when we are not sky-lined on a distant horizon giving away our position. The sun to the back position is viable when one is low and plans on engaging in open warfare and desires placing harsh light in the enemies’ eyes, but for quick ambush less effective. 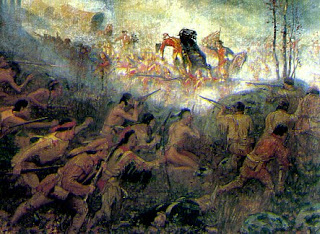 The “high and above” ambush with sun at the back would be noticed by avid woodsmen as the ability to read “sign” was front and center of any woodsman’s education. Reading sign is not only about tracks, and tell-tale broken twigs, but myriad other often un-considered aspects of our environment including shadow-reading.


The Penumbra Effect is demonstrated by the fact that shadows are crisper at their base and become fuzzier, less distinct as we move along the shadow’s “height.”


Let’s use a simple test to illustrate and illuminate: Stand with your back to the sun on a bright sunny day with your hand extended to your side at hip level, fingers splayed-look at the shadow; it will be somewhat distinct, you will be able to see each individual finger spread out. Now, raise this same hand above your head and the shadow becomes fuzzier and indistinct with the hand becoming blobbier the more we move it into the main trajectory of the sun’s disc. 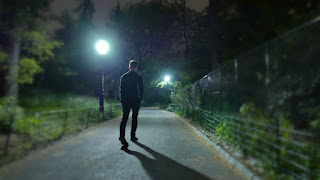 We see the same thing daily on commutes when we look at the shadows of vehicles travelling next to us, the vehicle shadow is crisp towards the bottom and becomes fuzzier towards the top.


Whereas most of us have to have such an “every single day of your life” observable fact pointed out to us, to Native Warriors and woodsmen “gone savage” this obvious fact would have been part and parcel of how the warrior sees the world.


I thank Mr. Nance for the gorgeous painting and inspiring the ever-present lesson that the warrior must not merely look at everything, he must see everything.
[For more on Native Scout Hacks see our Rough & Tumble Program in the RAW Subscription Service.]