In reading contemporary historical accounts written by soldiers (cavalry and dragoon), settlers, scouts, pioneers, and other citizens of the American frontier 1680s-1880s, I find mention that Native Americans (“Indians” or “Savages” in the accounts) did not walk like “white men.”


Their gait, stride, and foot placement is described often in poetic terms as “light” or “light-footed,” “fleet”, “gliding”, and often times “springy” or “spring-like.” These terms while descriptive of the effect do little to tell us the how or why of the gait.


We can find clues in accounts given by trackers in any of the myriad “Indian Wars” or skirmishes that riddled the continent in the first few centuries of the settling of the nation. The obvious telltale barefoot or soft impression of a moccasin is often a giveaway that you have a Native American track but this is less so in the moccasined foot as more and more Anglo backwoodsmen adopted this footwear.


But there are a few accounts that mention how you can distinguish a Native American warrior’s imprint from an Anglo track (incidentally-the strides discussed were not used only by the warrior caste, but by all peoples of a given tribe, but as we shall see it might be of particular value to a warrior.)


The key it seems is in the direction of the stride.


Self-Experiment Time: Stand up, right now, wherever you are and go for a brief walk. A mere 10-12 steps will do it. While walking, look at your feet.


Now stand-stock still. Look down at your feet. Chances are you stand with your feet in this same “toes out” orientation.


According to our trackers the Native warriors imprint has zero toe-out orientation. In fact, the toes point in the direction of the walk.


Is this “following the toe” orientation a genetic quirk of Native American skeletal structure? An artifact of primarily living barefoot or moccasined? Or a cognitive stride choice?


We’ll come back to that question.


Another difference noted by our trackers: Weight-distribution.


When Anglos take a step the heel lands first, followed by a rocking forward to the inside ball of the foot to a push off for the next step.


The Native warrior track sees little heel imprint at all. Instead their imprint favors the balls of the feet and/or the whole sole of the foot landing in one concerted unit as though one were treating the foot as a natural snowshoe.


In the Native American tracks, the ball of the foot imprints then become deeper, for rather than rocking to the next step the calves are actively engaged to push to the next step.


In essence, the balls of the feet are the 1st to make contact and the last to leave the earth with each step as you “follow the toe” with each stride forward.


If you experiment with this stride you will find that it does lend itself to such descriptors as light, gliding, and springy.


One can easily imagine such a stride being of use in stalking but it seems this stride was a given. Yes, used in stalking, skulking (war scenarios), but also in everyday life by young and old, men and women, and children alike.


Again: Skeletal quirk? Artifact of not using hard-soled footwear over the lifespan? Or design?


Again, we’ll come back to that.


The contemporary accounts I mentioned, whether they be of the tribes of the Eastern woodlands, the Plains Indians, or the bands of the Southwest often discuss incidents of remarkable endurance demonstrated by Native Americans on the move. There are many, many stories of seemingly tireless stamina related both admiringly and sometimes begrudgingly in military accounts from soldiers forced to face them in war.


We’ll discuss the interesting running “training” tactics used by various tribes another day, today we’ll keep it slow, we’ll stay with the walk. And here I will paraphrase two accounts to demonstrate that the aforementioned stride is one of conscious choice.


General Ulysses S. Grant had under his command a Seneca Indian, Ely S. Parker. A remarkable man who despite unforgivable intolerance from many served the United States with honor, represented Native Americans with aplomb, and earned the respect of General Grant.


Mr. Parker’s life deserves many words, but let’s allow one anecdote to suffice as it pertains to our topic at hand.


Mr. Parker served as an engineer under Grant during the Civil War and often there was occasion in which there were long marches through the “Wilderness.” After many days and many miles of this slogging trek the Anglo soldiers were, rightfully, fatigued. Mr. Parker went to Grant and asked if he might make a suggestion to which General Grant replied “Take command.”


Parker instructed the soldiers to alter their stride from toes-out to following the toe. He offered a few words on placement but the main crux he related was that to follow the toes engaged more muscles of the foot and more equally distributed the workload.


Mighty interesting. Here we have a Native American warrior who also happens to be an engineer able to articulate exactly how and why such an alteration in stride might be of value.


The moral of this particular anecdote according to the accounts that mention it, is that the trek through the “Wilderness” was recommenced and the soldiers related that they were far more refreshed and better able to bear the workload with this method of locomotion.


So far it seems there is more than enough evidence to at least experiment with this stride, but let’s add one more piece to the “conscious choice” evidence column.


When moving uphill Anglo tracks do not alter the toe-out orientation, whereas the Native American tracks abandon their “follow the toe” stride.


What we find instead is a “toes-in” stride.


When walking, hiking, loping up hill, Native warriors (and tribe members in general) adopt a slight pigeon-toed gait. I find this mentioned in many accounts with seldom a mention as to why…


But, then in an obscure passage we find a nameless warrior instructing an Anglo (who has adopted moccasins) to toe-in while following him up a slope.


“So that you don’t slip, you can grip with the feet.”


In barefoot self-experiment I find that there does indeed seem to be better traction with the toes-in method when scrambling uphill.


Over the course of a few months of consciously working these techniques I stand convinced that the “follow the toes” on flat ground and “toes-in” when going uphill are mighty useful adaptations. Initially they call for more work from the calves that have been used to a lifetime of heel-landing and rocking to the toes. Following the toes has let me know how long my calves have actually been dormant.


Now, whether you try the self-experiments or not is up to you, but I think we must all acknowledge that the conscious effort to make everything more efficient including our mere walking strides is a mighty thought-provoking exercise in ingenuity.


What other bit of obviousness might we all be blind to?

[For more on indigenous movement see the ESP RAW Program starting with volume 177 at www.extremeselfprotection.com] 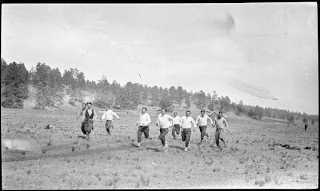