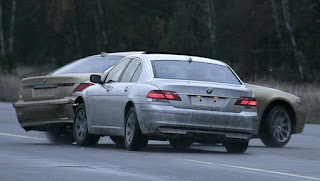 You could easily subhead this entry as: What I Learned About Tactical Driving from Driving Demolition Derby


So, my wife enters some paintings in the Country Fair and I’m flipping through the brochure and see among the Fair’s offerings a Demolition Derby, and right there in the small print is “Wanna drive?”


The idea had never crossed my mind, but when the curiosity-devil beckoned my answer to “Wanna drive?” was a hale and hearty “Hell, yeah!”


I give the good folks at Tennessee Slammers & Bangers a call and they could not be more accommodating to a rookie.


Being the inquisitive sort, I ask, “Any words of advice for a first-timer?”


[In fact, two fires on my night, neither of them mine.]


I asked a few more questions and most of the answers returned with “Back brace this, neck brace that,” “It hurts” “Man, you’re gonna feel it”, that sort of thing.


My hale and hearty “Hell, yeah!” was still “hell, yeah” but my hell was now lower-case and I dropped the exclamation mark.


Since I was going to put myself [and hopefully others] through repeated car crashes I thought I’d settle down and school myself with some advice from experienced Derby and Tactical drivers.


First, I want you to picture the car interior. These are non-modified cars, meaning no roll bars, no reinforcements, no driver’s harnesses---Nada. The concession to safety is…some glass has been removed--some. Other than that, it’s you and a factory seat belt.


So, with that in mind how do we stabilize ourselves inside this perilous environment?


Here are a few tips from the pros who crash into other pros for a living and live to limp away to crash again another day.


The Bootlegger Grip-When you grip the steering wheel, grip it in a thumbless-grip just as if setting up an Americana or Kimura submission. To the non-submission players out there, keep those thumbs on the same side of the wheel as the rest of your fingers; as a matter of fact, it’s a not a bad idea to press those thumbs tight to the sides of the index fingers until you get used to it.


One-It reminds you to use push-pressure on the wheel to control turns and allow it to spin instead of you tugging on the wheel and man-handling your turns.


Two-If [when] you take a hit, particularly to the front wheels and that wheel jerks [and it will jerk like a mutha] the wheel will spin in your hands as opposed to dislocating or breaking your thumbs. [That get your attention? I drive with a Bootlegger Grip everywhere. Too many texters in the world and I’ve only got two thumbs.]


The Command Position-This refers to how you “sit” your vehicle, or position yourself in the seat in relation to all that is around you.


Here are the basics—


·        Seat Upright/Head Perpendicular. Skip leaning that seat back in a comfy position. We’ve got to be upright, aware, and better prepared to brace the body and the neck for impact. [BTW-At least half the seats in the derby cars cracked their back-supports and slid on the slider-rails upon multiple impacts. We’ve got to be prepared to be in “control” even when conditions are not optimal.]


·        Shoulders Against Seatback-Settle back, allow that seat to support you, you’re gonna need all the support you can get upon impact.


·        Move that Seat forward until wrists lay over the steering wheel—This puts us close enough to control and not so far away that minor impact whips our hands off of the wheel.


·        Left foot flat on the floor goes to Dead-Pedal position, meaning you want to be able to push into the floor to keep your torso braced. This left foot is not inactive, not at all, you’re going to want to push to keep yourself upright for tactical driving to diminish as much bouncing around during impact as you can. BTW-You WILL bounce.


·        Pedal Heel on the ground—Pivot on the heel to use toe-pressure on both gas & brake pedal. No lifting that entire leg. Too much energy, too much time, and impact will fly that leg around more than you’d imagine. Always use the heel pivot and never lift the leg to make pedal transfers


There are many more tasty tidbits from the Pros that came in mighty handy, ideas from Threshold Braking, Successful Slalom, Inertial Cornering Strategy, Accelerating Out of Corners, the “Ease & Squeeze”; every single one of these I find useful in every mile of day-to-day driving, but we’ll leave that info to another day; we’ll keep this article within limits. 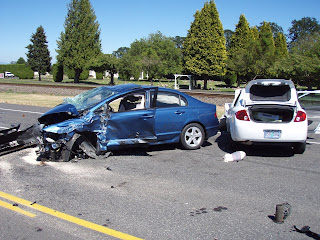 Let’s end with a little Crash-Survival.


Beyond the fundamentals discussed regarding bracing in the Command Position section, if/when an impact is imminent and we have choice of where to take the shot—rare, but if we do…


·        Take it broadside in the passenger doors [if traveling alone, obviously.]


·        You can flip all this advice around to know where to wisely impair a vehicle if need be.


·        And it is wise to always be moving. Just as with good footwork, and upper-body evasion in boxing if you take a punch while moving you take much of the stink off of it more often than not. Same thing with moving vehicles—as long as it’s not head-on, movement is a wise-tactic. Movement allows you to dissipate impact.


·        Keep in mind that my staying on the move will keep the tires spinning, this allows for greater dissipation of force than taking a hit on non-moving tires.


·        Also by staying on the move you keep the revs up and reduce the chances of stalling your engine, anathema if escape if a priority.


If you are in a vehicle that you’ve got to use for escape/evasion but you know impact is a likelihood.


First, remove any obvious frou-frous, that is, things dangling from rear-view mirrors, clutter on seats that will go flying and distract or more embarrassingly disable your vision or injure you on impact. [Keep in mind, when a vehicle is hit, loose shit hits the fan, don’t be the fan.]


Snap off any non-necessary hardware, door-handles, knobs, anything that might pierce flesh or make an unnecessary impact bruise.


You’ve got to disable the airbags so that the impact does not detonate the airbags and thwart your escape plans.


Once the airbags are disabled, pull out your tactical folder and slash every seat cushion that is not being sat on. Now take all that foam and stuff it between you and the driver’s door. Pack it in there tight, you can never have too much.


Whether derby driving, tactical driving, evasion driving, or day-to-day driving the true key is being alive, awake, and aware. Practice good awareness even on your quick trip to the store, because unlike a derby which is a scheduled car crash [well, more like 50 or 60 car crashes], the real world doesn’t follow a schedule.


Oh, and if you ever get a chance to drive a derby—Do it! Destructive fun in spades!


PS-If you're wondering how it went, lost the right front tire on a front-wheel drive--around minute 15 of heat two; tried to run on the rim but rain and mud and physics being physics…Missed making the elimination round by 1 slot and lack of a pit-crew. To the future!


PPS-Multiple impacts can lead to soreness as that head and spine get whipped HARD. I wager that wrestling training [neck-bridging] and Olympic lifting [strengthening the posterior chain] aided reducing the effects of impact damage.
[For more real-world survival tips, tactics, & drills see the No Second Chance Program.]