In the wake of evil acts we are left to grasp at solutions.


That’s a good thing. We all want to reduce malignancy in the world.


Many of our solutions turn to arguments, assertions, and aspersions on both sides because we often start our arguments in pre-existing camps where our tent-pegs of opinion are driven into concrete instead of soft ground where they can be moved if/when confronted with a compelling bit of new information.


Today let’s offer not a solution, but perhaps a deterrent. I say only perhaps, as I have no idea how to truly get inside the mind of evil scum nor do I have a desire to do so.


The deterrent I offer may be distasteful to some, trivial to others, and it has zero guarantee of success but…if you’ve got the time hear me out.


My idea calls for a change in the Constitution which is anathema to approximately half of the United States.


Me? I’ve got no problem with changing the Constitution, we’ve done it before and for damn good reasons. Article 1, Section 2 for example counts some humans as only 3/5ths a person and excludes Indians altogether.


We’ve also changed it for poor reasons, prohibition and taxation comes to my mind.


Lest my gun-owners out there think I wish to alter the 2nd Amendment, stand down.


I’m for sensible gun regulation but it seems the gun-genie is out of the bottle and I have seen no reasonable data that suggests deeper 2nd Amendment changes would have altered any of our shootings to the present moment.


My constitutional changing eye is on the 8th amendment.


The 8th in full: “Excessive bail shall not be required, nor excessive fines imposed, nor cruel and unusual punishments inflicted.”


My change has nothing to do with bails or fines and has all to do with cruel and unusual punishment. 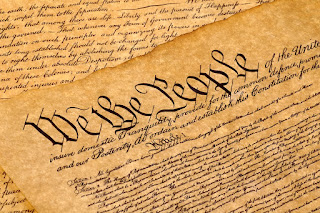 A change to the 2nd Amendment acts as an infringement on the rights of all citizens, with heaviest burden on the law-abiding gun-owning citizenry.


My change in the 8th would only fall upon those who have been convicted beyond a reasonable doubt of crimes that are considered exceptionally heinous in nature, mass shootings for example.


My argument is not one of capital punishment, which more than a few states do still have, although good data shows that the lengthy duration between incarceration and enacting the punishment offers little to no deterrent effect. That’s a problem.


If there is no deterrent effect then the killing of a human is merely an act of Old Testament vengeance, I’m not necessarily against vengeance, but here I am more concerned with deterrence, preventing future acts rather than flailing away after the fact to little effect for future victims.


We also have the not uncommon, “Oops! We’ve got the wrong guy” problem.


My faith in the effectiveness of bureaucracies makes me leery of passing along the power to kill when it has little to no deterrent effect.


Also, it seems that many shooters have no problem taking themselves out, taking capital punishment off the table and leaving us to wrangle with what they have left in their wake.


But still, that is not the crux of my proposed constitutional change.


I offer that in cases where we have decided beyond a reasonable doubt, “Yep, this piece of scum is the malicious turd” why not take the “unusual punishment” route?


A non-lethal unusual punishment route that by-passes the morass of capital punishment arguments and bases our deterrent effect on the experiment of using shame as a tool for good.


What if with every malignant bastard we put to trial with guilty results we focus not on their selfie they think makes them look like a bad-as wannabe, but their “I thought I deleted that” dick pics?


What if every embarrassing post, searched for item you’ve bought, lame love poem to the girl who didn’t want you, dorky photo of you in a turtleneck, sex toy hidden in the back of the third dresser door was up for view and discussion?


What if along with easily accessible mug shots your post cold prison shower non-sexual government-mandated naked photo was also on display forever?


I see no logical argument against such photos, such practices. If convicted we can take your right to freedom, why not your right to privacy?


This punishment is non-lethal, and perhaps not so unusual as many regular folks and celebrities have been made subject to such unwanted attention.


If Jennifer Lawrence can survive it with dignity intact, surely some “bad-ass” asshole with a rifle can do the same.


My constitutional amendment calls for no violence.


My constitutional amendment calls for no infringement on law-abiding citizens’ rights.


My constitutional amendment simply takes the narrative of bad-ass or “troubled loner” posterity away from the bad-actors of the world who want us to see them as memorable and turns them into perpetual laughing stocks, a legacy they may not have had in mind.


My constitutional amendment is on one hand silly, but I am deadly serious about it.


Would it have a deterrent effect?


I don’t know, but at this point could it hurt to try?


Let’s make losers losers forever and leave no foothold for the next loser to see something cool about being mocked and shamed for eternity.