Two Summonings & a Question Regarding Grit by Mark Hatmaker 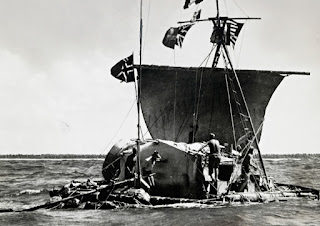 Thor Heyerdahl, the explorer/adventurer who postulated that he could sail a homebuilt balsa wood raft over 4,000 nautical miles to prove a theory regarding Polynesian settlement, a theory that few took seriously, sent the following telegram to three of his friends.


“Am going to cross the Pacific on a wooden raft to support a theory that the South Sea Islands were peopled from Peru. Will you come?”


The journey took 101 days not counting preparation time, the dramatic story is told in the book and documentary that takes its name from the raft itself, the Kon-Tiki. [If you seek out the documentary search for the unedited version which contains mind-blowing footage of the adventurers hand-fishing for sharks.]


I am going to ask you to read the telegram again.


“Am going to cross the Pacific on a wooden raft to support a theory that the South Sea Islands were peopled from Peru. Will you come?”


If this were sent by a friend of yours, do you go?


I mention this to highlight the difference between the extraordinary man that dreamt up such a plan, those equally adventurous who said “Yes,” and, well, us.


In casual conversation with many when I offer this scenario I am met with many valid reasons for why “I simply couldn’t go” family obligations job, etc.


I hear all of these, I do not discount them. I offer that these men who said yes had the same concerns and yet…


The conversation then becomes a bit of adventure-bargaining where we whittle down ambitions to “Well, I wouldn’t do that, but I would do this [insert substitution here.]”


At that point, I counter with, “Good idea, let’s plan that expedition.” And then suddenly we are back to “Well, I would but…”


The following advertisement was placed in a London newspaper by polar explorer Ernest Shackleton in, August 1914.]


Any guesses as to how that ad plays today in a single newspaper?


How many responds to “small wages” and “safe return doubtful”? 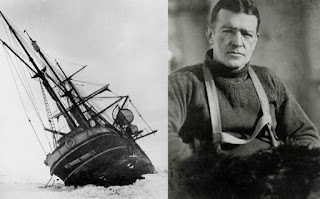 
I’m not certain that I do.


What I want to get at is, on one hand, we have a personal request from a friend to “Go do something.”


On the other we have a formidable request from a stranger that garners a large number in a small market.


I ask us to gauge this against our own experiences, our own sampling of human behavior today.


How easy is it to get somebody, anyone to go do anything today that is far less formidable than an uncharted ocean crossing or trek through the polar wilderness?


I have zero empirical evidence to back up my belief that we may be suffering from a deficit of human-grit, but I do have a large amount of personal experience that seems to suggest just that very thing.


Once we have our boundaries of where we would say “Yes, absolutely!” the next step is to plan that journey and send today’s version of a telegram or advertisement and see if any adventurers would like to accompany you.


If you get a “Yes” from no one, go anyway. Live your adventure. No one in the future is ever going to write an essay/article about a text reading “Thinking of going to Chili’s for lunch, wanna go?”


Grit is bigger than that.
[To indulge in grit, consider joining the RAW Crew.]