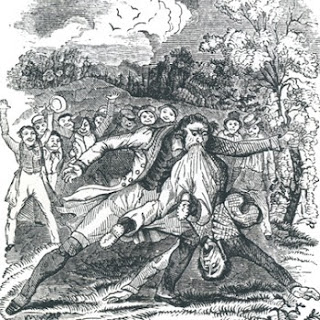 The following excerpt is from Whitman Mead’s Travels in North America [1820.]


The author refers to an incident he witnessed in 1817 while travelling though Georgia.


Such gatherings, according to Mead, occurred 2-3 times per week where folks would gather to fellowship, feast, drink, dance, gamble, exchange wares, and often following the ever-present horse-race a public challenge may be issued.


“A ring is formed, free for anyone to enter and fight…After a few rounds, they generally clinch, throw down, bite and gouge, and the conquered creeps out under the ring as a signal of his submission.”


Mead tells of meeting several past combatants who had noses bitten off, eyes gouged out, and more than a few who had been castrated in such affairs.


Many of these now unsavory tactics were not mere desperation moves in the heat-of-battle but sought for targets-of-acquisition with their own strategy and methods.