A Conversation with Scott Carney, Author of What Doesn't Kill Us by Mark Hatmaker 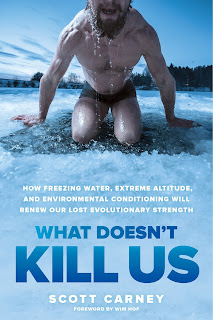 Scott Carney, author of the provocatively titled What Doesn’t Kill Us: How Freezing Water,Extreme Altitude, and Environmental Conditioning Will Renew Our LostEvolutionary Strength was kind enough to have a lengthy conversation regarding aspects of his book and his thoughts on similar subjects since publication.


I read Scott’s book upon publication over a year ago and I’ll admit I was initially leery. Was this going to be yet another “Train like this to be a bullet-proof superman!” tome with over-reaching claims?


Scott, himself is a skeptic as is borne one of his previous works The Enlightenment Trap [aka A Death on Diamond Mountain] where he ably dissects a bit of tragic charlatanry. The skeptical credentials brought me to the book, and the personal immersion admirably kept me there. It is one thing to sit and snipe from the sidelines, but Scott placed himself in the situations he was examining, reporting on, where he could get his first-hand subjective responses.


The premise of the book, in a nutshell, is not so much “how to train to reclaim your potential” we’ve got enough of those un-sourced claims in the world. It is the more novel [novel to this century, at least] “take your training to natural environments.”


I’ll allow Scott to explain the premise far better than I. 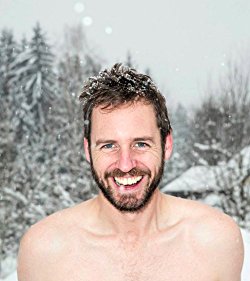 “Weak circulatory muscles are a side effect of living in a very narrow band of temperature variation. The vast majority of humanity today—the entire population that spends the bulk of its time indoors and/or whose only experience when it gets too cold or too hot is wearing state-of-the-art outdoor gear—never exercises this critical system of their body. Even people who appear physically fit, with lean muscles and chiseled abs, might be secretly hiding weak circulatory muscles. And the stakes are huge: In the long run, circulatory diseases contribute to almost 30 percent of the world’s mortality.”


As we might imagine this narrow band of comfort is relatively new to humanity, but even when climate control was a good fire there was a long and wide tradition of myriad cultures actively engaging in cold and hot acculturation.


Scott provides more than a few examples and they call to mind the observations of an icon of science Charles Darwin. This is Darwin filtered through the pen of Henry David Thoreau within the pages of Walden.


“Darwin, the naturalist, says of the inhabitants of Tierra del Fuego, that while his own party, who were well clothed and sitting close to the fire, were far from too warm, these naked savages, who were farther off, were observed to his great surprise, ‘to be streaming with perspiration at undergoing such a roasting.’ So, we are told, the New Hollander goes naked with impunity, while the European shivers in his clothes. Is it impossible to combine the hardiness of these savages with the intellectualness of the civilized man?”


This observation matches Scott’s exploration. This further comment from Thoreau also sums up the bifurcated stance that man is a modern cultural creature, but he is, physiologically indistinguishable from the natives observed by Darwin.


“For the improvements of ages have had but little influence on the essential laws of man’s existence; as our skeletons, probably, are not to be distinguished from those of our ancestors.”


This return to prior conditions, or, at least, embracing of some prior conditions is also echoed in the advice of Nassim Nicholas Taleb when he urges people to move away from gym equipment and get outdoors, lift unwieldy objects, run on uneven terrain: “Nature is not smooth.”


Scott’s entry point into the world of environmental training was through the idiosyncratic Wim Hof, aka “The Iceman.” Wim’s feats and exploits in extreme cold and at altitude are well-known, and it was under Wim’s tutelage that Scott was able to shed his skepticism.


Scott doesn’t simply accept Wim’s word as gospel, nor does he simply scoff. He puts his money where his mouth is and joins Wim and crew for stripped down exploits in snow, ice baths, and grueling paces at altitude up Kilimanjaro sans oxygen and what many of us would call sensible clothing.


Being a good skeptic, he doesn’t simply give us Wim’s side of things, he explores further, meeting with scientists who study human responses to the extremes, and he ventures with other self-experimenters who use their own bodies as the laboratory.


Scott is able to walk us through the “Here’s how to do it” aspects of such training but I will give none of that away here as the curious should put their money where their mouths are and dollars in Scott’s pocket for work well done.


As Scott describes the process, it is akin to beginning a running program. Perhaps initially a trot around the block is tiring, but with a little effort you’re having 5K thoughts, and that initial trot around the block feels like a walk in the park. And some of us after a 5K or two might place our eyes upon a marathon, and so on and so forth.


The same for environmental training. Small exposures can aid our standard existence, just as running can make the stair climb at work easier, scheduled cold exposure can make standard “chilly” weather not only bearable but perhaps a bit closer to the experience of the Tierra del Fuego natives. 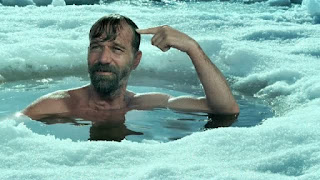 Much of the ballyhoo around Wim’s feats is because of the extremes he is willing to undergo, swimming beneath river ice, extended stays in ice baths etc. But Scott emphasizes that that is not necessary to gain the benefits of the environmental method. Wim himself explains in his TED Talk that he is an extreme athlete, he does the extreme feats because that is what he does, that is who he is, in our running analogy he is an ultra-marathoner. If one chooses to run there is no one who says we have to run an ultra to gain the benefits, the same with environmental training. We need not trot across Antarctica naked to gain benefits. A regularly scheduled cold shower may be quite enough for our 5K lives.


Stepping aside from cold-training, when asked if he still used the Wim Hof method he said undoubtedly, but more the breathing exercises, the “Wedge.” [More on the “Wedge” in Scott’s next book.] He still uses the cold training occasionally, but he has found for his own practice the breathing-method [covered in his book] is where the rubber meets the road.


Scott stresses the breathing is more about internal processes than athletic feat. That is, because some are able to acquire a lengthy breath-hold with the method that the breath-hold becomes the focus for some, Scott wants us to not to focus here. Nor should we mistake the terrestrial breath-hold as useful for aquatic use. Scott, Wim, and free-divers will all tell you DO NOT USE THIS METHOD FOR SWIMMING.


The breathing practices here are not about stopwatch bragging rights, but as an adjunct to everyday health.


I’ll allows Scott to close with this provocative observation.


Even though our nervous systems crave connection to the world they evolved in, the tendency in the modern era is to think of humanity as fundamentally different than everything else. We insist on being bounded by our bodies, our property, our kinship network, and our social media profiles; and so we hold the rest of the planet at arm’s length.


Thanks for the conversation and provocative read, Scott!


[For more observations, drills, and tactical applicationsof such training see this blog and our RAW Subscription Service.]