All right, Friends, for today’s sermon let’s have a look at a dire day in American history, shine a light on an American hero, briefly touch on school-shootings, and ask ourselves a few questions of perspective.


Do you know the name?


I’ll be surprised if you do, but it’s a damn shame more of us don’t know the man’s name or his deeds or what they can teach us about walking the readiness talk.


December 7th, 1941, a day that will live in infamy. The day the Japanese Navy launched the surprise attack on Pearl Harbor, Hawaii.


3:42 AM, the small minesweeper, the Condor, is patrolling just outside the submarine net off of Pearl Harbor. The Condor picks up an unusual wave that could possibly signal an unreported submarine in an undesignated area.


The Condor moves to high alert to watch for more signs. As per protocol he messages the sighting and their pursuit of the unusual activity. Back on land the report does not stir anything.


Lt. Outerbridge and the Condor continue to monitor. Other military radio stations report having heard the Condor’s continued radio messaging to headquarters meaning that more than the Condor and those at headquarters were aware of the situation.


Keep in mind, this is peacetime, and hindsight being 20/20, no one is quite sure as what to make of the unusual wave sighting from this rookie commander or what to do about it. To our “Hey Idiots! It’s a sneak attack!” informed eyes, the action seems clear, but we perhaps do ourselves too much credit.


Upon making another contact with the “wave” without specific orders from command, Lt. Outerbridge decides to err on the side of safety as his protocol mandated—he drafted and sent the following message to command at 6:53 AM: “Attacked, fired-on, depth-bombed, and, sunk, submarine operating in defensive sea area.”


Are you hearing that? Outerbridge and the Condor fired the first shots of the war in the Pacific and sunk a midget Japanese scouting submarine before the attack on Pearl Harbor commenced.


Considering all who were privy to the actions taken by this rookie commander, did anyone else go on high alert?


At 7:02, two radio-operators 230 miles north of Oahu, detect the large Japanese air formation heading towards Hawaii. They report the formation to the commander and nothing is done. The formation is guessed to be a US military exercise that someone forgot to inform them about.


Back to the Condor, just before Outerbridge sent that message to headquarters he spotted a sampan in an unauthorized zone that he thought was behaving suspiciously. He detains the craft and its Japanese skipper and begins escorting it for the Coast Guard to take it in.


He messages again but no alarms are raised. 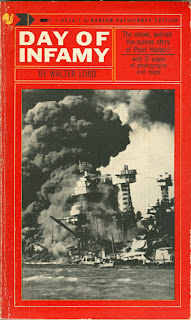 At 7:03, the Condor, yet again, picks up something on their sound apparatus, Outerbridge orders the Condor to pursue and they drop five depth-charges. A huge pool of oil erupts 300 yards astern. Unconfirmed but likely another submarine. They report this and…nothing is done ashore.


Lt. Outerbridge and the crew of the Condor not only fired the first shots of the war in the Pacific, they likely sunk two midget subs, detained a possible spy/spotting craft in the sampan, and reported all of these as was protocol.


Walter Lord, author of the magisterial Day of Infamy, said of Lt. Outerbridge “…he was willing, when other men were hypnotized by peace.” 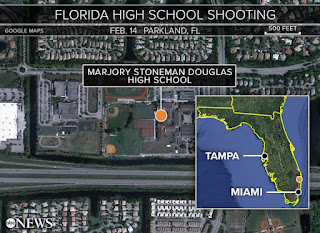 There were 40+ warnings regarding the scum that perpetrated malignancy at Marjory Stoneman Douglas High School in Parkland, Florida.


Now, often when I discuss such things in person I hear assertions as to how alert my fellow conversationalists are. Or how outraged they are at the inaction of others in the aftermath information of tragedies.


Allow me to ask:


·        Has a car alarm ever gone off and you responded with annoyance rather than with caution?


·        Has a smoke alarm ever gone off and you rushed to re-set it before checking for fire?


Most of us behave and conduct our lives at a base-rate of peace, that is, as if all is OK, hunky-dory—because, well, for the most part that is true of our lives. That’s a blessing.


But…if there are safety protocols in play. If there are specific devices that are meant to signal danger our default might ought to be one of caution. That is confirm or disconfirm danger and then return to hunky-dory living.


Assuming that all alarms are false alarms renders alarms meaningless. If we will not at least raise a curious eye to an alarm there is no point in having them.


I am not urging paranoia, I am encouraging diligence when a safety device or warning is proffered.


If there were no attack on Pearl Harbor then Lt. Outerbridge and the Condor, may have wound up making a big mistake and rendered a pleasure craft dead in the water and be remembered as fools.


But the historical record is different. An alarm was raised. He investigated the alarm. He acted in accordance with the alarm protocol where so many others did not.


Would we be any different?


Are we any different in our own lives, right now?


Hypnotized by peace. Hindsight.
[For access to Awareness Drills & Situational Mind-Setting see the No Second Chance Book of Drills available only via the RAW Subscription Service.]