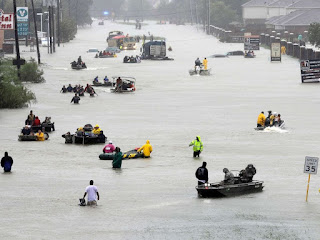 I compose these brief notes while the unfortunateness of Florence takes aim at the East Coast. I offer it in the hopes that we may have it at the fingertips of our minds for as Seneca reminds us “What has befallen one man may happen to all” or as the Boy Scouts would say “Be Prepared.”


The following ideas are gleaned from naturalist studies in river-dynamics, the frontier scout tradition, and an American Indian tactic or two. Keep in mind when we discuss river-fluid mechanics these same mechanics will hold for “concrete rivers,” that is, streets turned to river by flood.


Rivers basically have two broad aspects to their composition Upland & Lowland. In the Upland portion the land is steeper and we find more energetic water. In the Lowland phase, it flattens out and at times we may see only a yard drop in elevation in a ½ mile of travel. The idea to keep in mind is that the faster or more energetic the flow the closer to the source we are, and the more care we must exercise when entering the river.


Upland River characteristics: Speed, energy, sometimes narrow and steep channels, and waterfalls. You can judge the energy the upland river possesses in full flow by the size of the boulders, the debris, the scatter of vehicles in the middle and along the banks. The larger the debris the more energy.


Also—the sound. Upland rivers often provide white water noise, not just as found at a waterfall, but in general as it breaks over rocks and debris, or simply the sounds made by its rate of flow.


The Lowland River Phase is usually broader and has longer straightaways and typically silent unless something is plunked into it.


If we know that we must cross a river or flooded street, it is wise to choose lowland phases where we can, move downstream where possible, and avoid narrowing channels that will multiply the water’s energy.


Lee-Scree as Force Indicator. Lee-scree is the debris deposited by a river. In the wild, the rocks, boulders and logs we find within the main channel and along its banks. In the urban river/flood the cars, and all other detritus swept into its path. By noting the size of the lee-scree in a river or stream we can gain an idea of how much energy the river has when flowing at force. Large boulders, rocks, etc. tell us this river carries a great deal of power, not the best place to interact with the river. 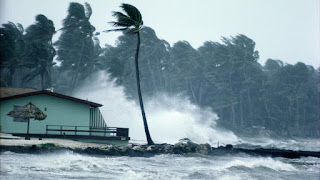 
This is also useful information for those using canoes, kayaks, etc.—in allowing current to ease workload—aim for outside bends when going downstream, inside bends when moving upstream.


The flow is fastest in the center of the river. This is all about friction. Sailors, kayakers, seaman of all stripes know that if you want to pile on speed look for the center of the channel or “stream” in areas of open water. The center is often positioned over the lowest point, geographically the Thalweg, and the reduced friction center-stream makes for faster flow.


With the preceding in mind, when fording, expect increased force and deeper water as you near the center.


When wading a moving river—face upstream. If you fall you want to fall towards upstream with the strength of your legs facing downstream to dig in and stop being swept away, or at the very least allowing your legs to be what comes into contact with debris and obstacles rather than your head. 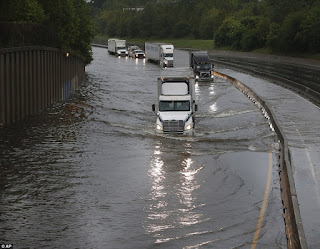 
Four inches of moving water can sweep a car away. We are not nearly as heavy or stable as an automobile.


Again, it is speed or rate of flow that is often the danger and not depth. Many fall prey to the illusion that is safe to cross ankle-deep water. If it is a lowland phase, go right ahead, if it has high flow---find a lowland phase.


I’ll offer one more tip, this one from an American Indian tradition. When the decision has been made to wade a river and there are few exposed dry rocks to cross over on, face upriver and place your feet-toes upriver/heels downriver—against the upriver side of rocks as opposed to on top of the rocks. The force of the water will “stick” your feet to the rocks as opposed to being swept off the top of them. If more stability is required use a stick in the hands to post upriver for balance, or if no stick is handy, lean forward and place the hands on the upriver side of stones and scuttle sideways to ford.


May this information need never be used, but, judging from the size of the storm…


To those in the path of Florence, and Florences yet to be, may it serve well.