Facer Your Muzzler by Mark Hatmaker


Today’s titled historical offering borrows a bit of lingo from fisticuffs, or The Fancy [Early Boxing] circa. 1780.


Whereas a “Muzzler” is an early term for an upper-cut.


Today’s historical look-back is less about vocabulary than about a bit of lost tactical advantage when it comes to the use of the muzzler.


If we are throwing it well we have set it up with a wisely chosen preceding blow that masks our upper-cut intent as there is no punch more unforgiving than a poorly set-up upper-cut, or God forbid, an upper-cut thrown without set-up at all.


The upper-cut of today is primarily an inside tool, that is, thrown from close-quarters, and in MMA, absolutely legal and wise to throw from the clinch.


If we are throwing from the outside, it is wisely thrown from the Bridge, that is, the blurry ground between outside sharpshooter tools and inside-the-phonebooth throw down. [Those too young to know what a phone booth is, well, just picture fighting in a broom closet and you’re on the same page.] 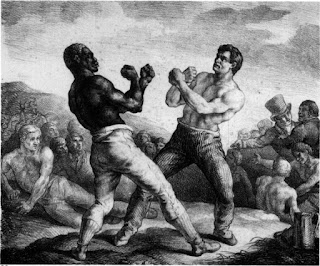 Let’s wind back the historical clock to have a look at some wickedly intelligent set-ups of the muzzler.


The muzzler was set-up then, as now, with a preceding blow, but in our 17th-18th century time machines we see alternate facers being used over the strict use of the fist.


The muzzler is often preceded by what looks like a forearm brace or forearm facer that actually makes contact. [I would direct you to RAWs 182 & 183 for Drills & Applications and also to our blog entry on “Fisticuffs.”] The ulna, or outside edge of the forearm actively follows a caulking step to make inward and upward contact. [Perfectly legal then, not so much now in boxing for obvious reasons.]


The facer has a four-fold use.


·         A balance-disruptor to put the opponent on their heels stealing power and speed from counter-blows.


·         A damaging blow in and of itself as that ulnar-blade can do some mighty wicked damage.


·         And as a defensive aid as the “setting an opponent on their heels” does much of the magic, but the ability to bury the head into the facer acts as a form of protection much as a bit of armor in the morion mold.


Actually, there is an additional sneaky 5th use that we’ll hold-back for RAW Subscribers.


The facer or brace began to fade away as kinder and gentler rules were adopted but we can still see its remnant in many boxers of the early 20th century. One can look to instructional materials as late as 1943 to see the forearm held in facer position as the upper-cut is fired. In these later uses it is purely defensive as the facer is not intended to make contact.


I suggest working the uses of the facer on the heavy-bag and be a bit careful about applying this with mitts or in sparring as it will do some Damage with a capital D.


I always use a face-shield when doing mitt-work when we are developing facers as it is hard to disguise or mitigate the wallop.


For pure boxers, this is a bit of historical fun. For street-work, a bit of MMA meanness, and old-school enthusiasts the facer with your muzzle is a bang-up wistycastor. [Powerful Blow.]