Boxing vs. Savate: The Boilermaker Exhibition by Mark Hatmaker

Lest we forget, mixed martial arts, mixed matches, and combination fights are not a new development. Whether we reference Greek pancratium and its long lineage through the fearsome hybridization-melting pot of American Frontier rough & tumble, fights that were more than mere boxing, more than mere grappling have been of great interest.


The fascination often lies in the comparison of style vs. style as opposed to athlete versus athlete. We must never mistake that a kicker knocking out a grappler means that kicking holds utmost superiority, or that when a grappler chokes out a striker that grappling is the be-all-end-all. It merely means that in that particular instance the specific victorious athlete held sway or that luck had its way.


With that preamble out of the way, we must admit no matter what is “proven” by mixed matches that they hold appeal. Let’s look to one such historical mixed match.


Heavyweight boxing champion Jim “The Boilermaker” Jeffries was coming off of his victory over the canny [and smaller man] Bob Fitzsimmons. Jeffries has come down to us in history more for his comeback fight defeat vs. Jack Johnson and the racial nastiness surrounding the lead-up than for the athlete and force he was pre-downfall.


Pre-downfall, Jeffries was considered somewhat invincible. This opinion was not so much due to his boxing prowess, which many derided or found rudimentary at best, but more for his phenomenal attributes of strength and stamina. Add to that an ability to ride through a good deal of punishment.


Jeffries was an astonishing stamina machine for such a big powerful man. An example of his training regimen is found in this typical day.


·        Then breakfast: A lambchop and two soft-boiled eggs. No coffee, tea, milk, water or fluid of any kind. Jeffries believed excess fluids cut down on speed.


·        Then enters the ring to spar for 16 3-minute rounds. His partners are instructed to slug as hard as they can while he would hold back.


·        For supper: Lamb chops, spinach or asparagus—still no fluids. [I know we scoff at his superstition, but I wonder which one of our dietary “facts” will be scoffed at next Tuesday?]


Now, that is one helluva workload. If we compare this to Jeffries boxing deficit we can get a taste of how and why this workhorse made it as far as he did. Many are not willing endure such a Spartan regimen.


Let’s move the story along to our mixed match.


Jeffries picks up the title on June 9th, 1899. He then did what most champions of the era did—took to the stage to travel the world and offer audiences horrible thespian skills. Jeffries traveled with a show called The Man from the West. He also did boxing exhibitions at most of these engagements, as well as some baseball umpiring.


In these exhibitions, local champions would step into the ring and The Boilermaker would treat them nicely while they did what they could. If we’ll recall, Jeffries was used to holding back as it was a mainstay of his sparring style.

He travelled to England with his show and boxed many more exhibitions knocking out more than a few folks who wanted to see if they could “get some licks in on the champeen.”


Onward to Continental Europe. In France, he is slated to face a “champion” [now here the champion’s name becomes elusive in the accounts, but the circumstances and outcome remain consistent.] 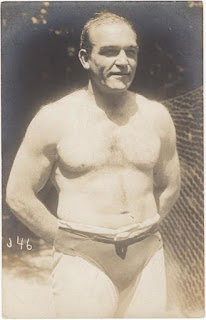 Accounts state that Jeffries went to work with “jabs to the nose, hooks to the body, and light raps to the chin.”


Jeffries used a balance-upsetting strategy and the challenger “never got a kick away.”


When the challenger began to stagger around the ring, Jeffries started holding back. His corner had advised him it was bad form to “knock out such an eminent athlete.”


Unable to “carry” his opponent longer Jeffries ended the bout by casually pushing him through the ropes.


This mixed match will never solve the “which is better” argument, but in this case I think we can state that a very powerful man held sway by dint of his athletic attributes aided and abetted by his boxing.


[For tactical applications of old-school boxing and Frontier Rough & Tumble see our store.]