How to Be a Good Kidnap Victim by Mark Hatmaker 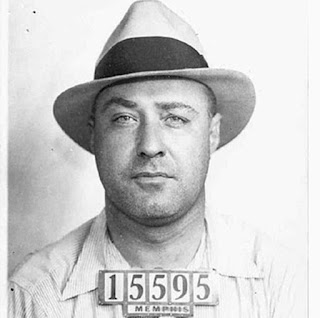 George “Machine Gun” Kelly, was a Depression-era gangster with one of the most colorful names going. Let’s face it, it beats the hell out of Baby Face or Pretty Boy, or Creepy. Despite the formidable name Kelly was a little less deadly than the moniker belies, associates in Alcatraz where he spent 21-years of his life referred to him as “Pop Gun” Kelly due to his model prisoner status and less than gangstery ways.


George Kelly, though not a cold-blooded killer, was, indeed, a criminal. He had numerous charges of bootlegging which in and of itself is not so glamourous a crime. It seems his wife, Kathryn Kelly, played the role of reputation-promoter, she gave him the name “Machine Gun” and sought to create the reputation that George himself did not really warrant.


The world may not have taken much notice of the dapper bootlegger had it not been for a switch in modus operandi. It seems the Kelly gang thought that there might be more money to be made in kidnapping than illegal liquor sales so they set their sights on one, Charles F. Urschel, a wealthy oil magnate in Oklahoma.


Kelly and his gang barged in on a bridge game at Urschel’s residence on July 22, 1933. The almost comically ill-prepared gang encountered two men at the bridge table and were not sure which one was Urschel so they took both men, Urschel and his guest Walter Jarrett. Once on the road Urschel declared who he was and urged them to set Jarrett free, which they did.


Urschel was blindfolded from the get-go and wound up being held in a farmhouse in Paradise, Texas for over a week. He was released on July 30th after a ransom of $200,000 dollars was paid by the family. 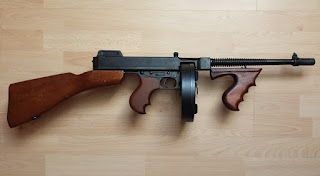 The FBI was involved from the beginning of the case thanks to new kidnapping as Federal crime legislation following the tragedy that was the Lindbergh Baby Kidnapping.


The FBI receives the credit for capturing Kelly and his gang, but what must be pointed to is the fact that this might not have been done if it were not for the amazing observational prowess of Urschel himself.


Despite being blindfolded for much of the time, Urschel managed to:


·        Covertly touch as many surfaces as he could in the home in unusual locations so that once wiped free of prints many of Urschel’s still remained for confirmation.


·        He noted the pitch of speech and locality of dialect of each gang-member. Always listening for distinguishing phrases and slips of the tongue.


·        He noted an airplane that passed overhead around the same time every day and “timed” that passage with an estimation from a rooster crowing and other aural clues.


In short, Mr. Urschel, although a captive, never stopped paying attention, or should I say, in the midst of what must be an exceptionally stressful time, he feared for his life after all, he never lost his wits. In fact, he doubled down on his native intelligence and was able to provide the observational clues that led to pinpointing the farmhouse, and from there to the arrest of the gang-members.


Now, here’s the question to ask ourselves, just how observant are we, that is, me and you, in the here and now?


Do we note what is going on around us even without the onus of “fear-for-life” stress and blindfolds?


Do we note apparent patterns such as regular plane passages? Or, are we “blind” to what is around us while our eyes are wide-open?


We must ask ourselves, if we don’t prepare, train, and prime our observational skills now, are we hoping for too much when we assume that while blind to what is around us in the here and now we will be Charles F. Urschel calm, cool, collected and intelligent when it hits the fan?


[For 100+ Mind-Setting & Observational Drills& Skills see the No Second ChanceBook of Drills available only to RAW Crew members.]