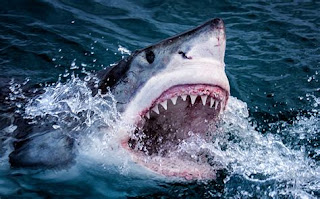 
No, not because we wish any of the victims harm, but we do love the “Oh, my God” moments, the brief titillating fascination of pondering the fact that there are still a few beasts out there capable and willing to feast on us occasionally (beyond microbes and insects, that is). Each time we hear one of these shark attack reports, and that’s pretty seldom according to the mighty Wikipedia the US average is 16 per year with an approximate death every two years; still, after hearing of an attack either we ourselves, or someone we know says “You won’t get me into the water.”


Now, looking at these numbers in no way diminishes the impact on the victims and/or their families, not at all. But I would like to point out to those who reason that there being man-eating fish in the sea and deciding not to enter the sea is not quite as wise at it may seem. Sure, any of us who have stood on a crowded shore for merely a few days a year can do a little ad hoc math and come to the conclusion that 16 per year out of all of this luscious meat hitting the water is pretty low odds. Sharks would really need to step it up to be more of a statistical threat to any of us.


That’s the last decade assessment of auto deaths in the United States. This number has been trending downward and that’s a great thing which can be attributed more to better designed safety features than to better drivers, I’m sure. What I do want to call your attention to with that 30,000-40,000 number is the fact that automobile accidents and fatalities are reported each and every day.


Now, after hearing one of these daily reports of tragedy count the number of times that you, or someone you know responded to one of these reports with “There’s no way you’ll get me into a car again, no way.” 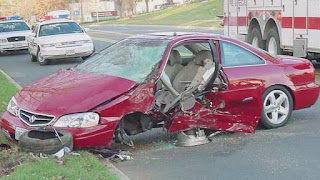 My guess is never.


We risk our lives far more driving to the “shark-infested” beach than we do swimming those treacherous waters.


So what’s going on here? Why does the extremely unlikely prospect of a shark attack move so many of us to cautious behavior and what is far more likely to kill us is not sweated at all?


Well, for one, we humans are extraordinarily bad at risk assessment, we routinely underestimate true risks and thusly text while driving, and vastly overestimate minuscule risks and miss out on some extra beach fun.


The second, and I think this is the largest part of the problem, is the extraordinarity bias. We hear of shark attacks so rarely that when we do it is dramatic and catches our eyes and ears. Whereas, car crashes, our consciousness performs a bit of “been there, done that” unless the victims are people we know. 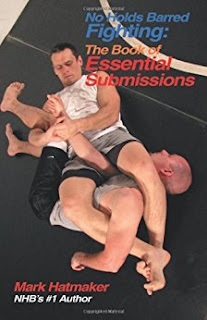 Now what does all of this have to do with martial arts and combat sports?


First, a quote from Musonius Rufus one of the Four Horsemen of Roman Stoic Philosophy: “The strongest weapons and those most able to keep their user safe are the best, not those that attract attention because of their sheen.”


Musonius is urging us towards practicality and pragmatic choices rather than the extraordinarity bias. As we preache ad naseum in our book The Essentials some weapons and tactics are better than others and more often than not, our best weapons are the bread and butter tools of the trade. The jab pays far more dividends than the spin kick, a solid no-frills double-leg is worth more than a high-flying hip throw, and a tight rear naked is worth all the omaplatas you can shake a missed-submission-stick at.


Yes, some outliers do score but often when they do score we recall them because of their extraordinariness (our bias for the rare event), we forget to be just as impressed by the healthy number of jabs stuck in an opponent’s face that closed an eye and shut down an effective offense. We pay less attention to the simple but well-honed workaday leg kick that slows a fighters pace, but marvel at the spin kick that landed with the sole of the foot.


We must also not forget that it is often these memorable tactics that require the most sheen, that is, the most work to educate in the first place and even more work to maintain. Time and energy that could have well been spent making what already works well, work even better.


So, when it comes to assessing our arsenal and our tactics it might be wise to assess for sheen and ask ourselves is this tool a shark that bites seldom, or a car that crashes hard day in, day out?


[If you'd like to delve deeper into the stats of what does and does reap rewards in MMA see our book The Essentials.]