A Conversation with Fernan David Vargas by Mark Hatmaker 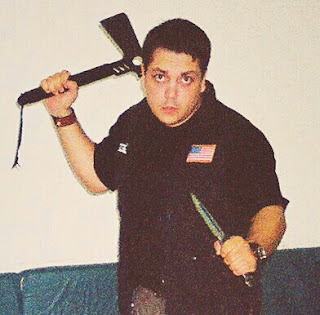 Fernan Vargas is a life long martial artist and author.  He has studied Native American fighting traditions and is an aficionado and researcher in the field of Frontier Combatives.  Learn more about Mr. Vargas at www.FernanVargas.com www.TheRavenTribe.com and www.Raventactical.com


First things first, thanks for taking the time to chat. We’ve chatted before but the conversational shoe is on the other foot this time. I’ll grill you. You’re a man of many hats, but today I want to focus on one particular area—indigenous arts. In particular, indigenous arts within the United States. Tell us a little about your influences in that regard, it can be Apache knife-fighting what have you.


There is a definite difference in the way things were taught in the past as to how they are taught now.  From my personal experience, European and Japanese martial arts are examples of highly organized and codified systems of combat.  Arts that I have trained from other regions seem to be much more fluid and organic.  Teachings are drawn from everyday life.  They permeate everyday life and are not necessarily a separate study.   By necessity, due to our goals and our culture I feel that modern combat arts have become very regimented systems of training.


Combat arts are less codified, systemized or dogmatic within the Americas. That is, compared with what we see in Eastern martial arts or the war arts out of Europe where we have manuals, long visible traditions to draw upon. Here, things get a little blurry, how do you confront this hurdle?


I have had the blessing of training with several men who teach the American arts and did the work for me.  They all made efforts to translate the old ways into a digestible system of learning more palatable to our culture.


Do you think this blurriness is intentional or the historical quirk of not relying on the written word within some cultures?


I do not believe that the “blurriness” is intentional.  I believe it is a result of cultural norms and needs.  It is also a result of the type of martial arts that they are.  There are Military arts and tribal arts.  Military arts are codified, taught in a particular time frame to a particular group.  Tribal arts, were much more of an extension of everyday life.  This is seen not only in the American arts but also in tribal arts such as Silat and Kali.  There are parts of South east Asia which are still very remote.  People rely on these skills daily.  They are not for a professional soldier class but for everyone, all of the time.


I do not believe that these cultures has any need to write these things down.  There was no nostalgic or ritualized reason to do so.  They were tools.  When culture changes and the need is diminished, these things tend to go away.  I laugh when people say that there were no native fighting arts.  They often say, “where are the books?”  I used to have a beta max player.  The technology evolved.  I have no need for the beta max anymore.  I cannot prove to you that my family owned one, but it was there at one time.  I taught my son to hammer a nail, but I didn’t see the need to go write a manual on how to hammer a nail.  The important thing was that he has this skill, once that goal was met, there was nothing left to do.


Has there been anything in particular about indigenous arts compared with what we would think of standard arts that you found surprising?


The second thing that I learned is that historically these arts were taught throughout daily life.  No one called together the group to stand in a line and practice their right cross or high block.   Games, were the primary way that the young ones learned these skills.  Lacrosse is probably the best known of the American games played.  If you look at Lacrosse, it basically is a mini skirmish.  All of those useful skills are practiced within its play.


Repetitious use of their weapons in hunting, and surviving also “perfected the attributes”.  In Puerto Rico, there is a traditional Taino art now known as Guazabara.  There is also African influenced Kalenda.  People in these areas were field workers.  They learned how to cut with their machete, not by going to machete class but by cutting sugar cane in the fields for 12 hours a day.


What aspect of indigenous arts have you found most compelling?


Silat instructor Joel Champ once told me that he loved the knife fighting that we worked on together because it was so “RAW”.  That always stuck with me.  It is true.  It is raw.  It is not locked into convention.  It is also very primal.   Indigenous arts were also very pragmatic.  They adapted much learned from their battles with other tribes, and Europeans.


Is there an aspect that you know of only in legend, at least thus far, but would love to discover more about?


One thing that has proved elusive to me are empty hand martial arts.  Master Peter Brusso once told me, “There are no combatives without weapons”.  That makes sense to me.  If you are fighting for your life, you seek the tactical advantage.  I think this may be why the native empty hand tactics are harder to find.


Do yo find yourself more influenced by the weapons culture or the empty-handed aspects of these arts?


I have learned primarily the weapon based aspects of these arts.  The strategy that I learned from those studies however translate well to any empty hand system.


Are there aspects of indigenous abilities that aren’t necessarily martial, but you find of particular value to study? 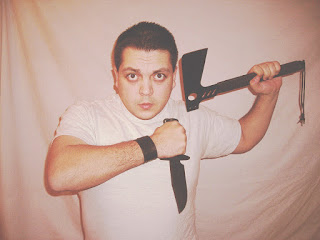 In recent years, I have grown to appreciate almost all indigenous skills, particularly hunting, tracking, and wilderness survival.  Our world is comfortable and safe, for now.  Many of us would be dead within days if a catastrophe occurred that stripped us of those comforts.  Knowing the old ways exponentially raises your survivability and they should all be studied.


Aside from your own work what resources would you guide indigenous arts enthusiasts towards. A sort of “You have got to read this if you want to know what this is all about!”


When speaking of strictly Indigenous combat arts instructors can be hit or miss. In my experience the men who truly know these arts and who can teach you the history and applications correctly is a short list.  For Apache skills men like the Redfeather brothers, Robert and Ralf, Snake Blocker, Alan Tafoya, Blaise Loone, Thomas Howanic and Chad McBroom will not steer you wrong.  For Taino arts Edgardo Perez is the man, and for Meso American Arts no one has done more in the field than Manuel Lozano.  Carmine Downey also makes the list as a traditional native knife and tomahawk instructor, as well as Marc Lawrene. Raven Hawk Cain and Black Hawk Walters have done an amazing job of presenting a modern approach to native combat arts.  German Dominguez in Spain also leads our own Raven Frontier Combatives program.


When you expand the list to include primitive ways instructors, men like Tom Brown and Benjamin “Raven” Pressley are just amazing.


As for books, I have written a book on Native American Blade Craft.  Guru Marc Lawrence has also written a book on native combat arts.  Both are available at www.MartialBooks.com In addition to these the Warrior Scout series that I have co-authored with Benjamin Raven Pressley delves into many survival skills drawn from native traditions.  Snake Blocker has several books available on the Apache traditions.  Thomas Howanic of Patriot martial Arts in Texas has an excellent dvd series on knife combat, much of which is inspired by the Mesacalero Apache tradition.  Manuel Lozano has what I consider to be the preeminent book and DVD series on Meso American martial arts, specifically the Aztec traditions.


What’s next in the pipeline for you?


I am currently working on a book series called “Way of the Raven: Warrior Scout” with Benjamin Raven Pressley.  The series gives instruction in areas such as wilderness survival skills, primitive hunting, tracking, philosophy and combatives using weapons such as the scout staff, knife, tomahawk and more.  The series is an attempt to present a thorough and comprehensive skill set to those who are interested in this type of material.  The first three volumes are already available at www.RavenTactical.com


Thanks, again for taking the time, and I have no doubt that we’ll hit again down the road!
[For more on such topics, see the aforementioned references in the conversation and our Rough & Tumble material in the RAW Subscription Service.]