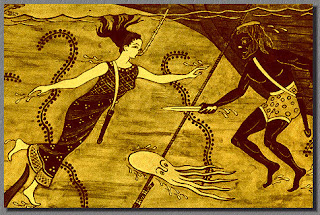 A recent series of water-related tragedies reminds us of, at the very least, the vital importance of the ability to swim, and for the ready-warriors of the world an ability that goes a bit beyond that.


The mere ability to swim goes a long way in dire circumstances, not to mention the copious scientific evidence demonstrating the surprising ways human/water-interaction is not just exercise or fun [which it is] it is also therapeutic at a deep visceral level that is not yet well understood. [More on this fascinating research another day.]

Our ready warriors of the world might wisely embrace taking water-interaction a bit further. An idea we addressed at some depth in “Aquatic Evasion.”


The ancient Greeks have numerous mentions of water warriorship in contemporary accounts as early as 400 B.C.E., but the one I’ll call your attention to today is Herodotus’ account of a man named Scyllias. In Book 8 of Herodotus’ Histories. He tells how Scyllias is engaged by the Persians, who were then at war with the Greeks. Scyllias’s task was to recover treasure from sunken ships.


His method of diving is not detailed but we can assume that he may have used the method provided in other Greek writings. These writings tell of Greek sponge-divers who used lead weights and ropes to speed descent and ascent.


Scyllias later defects to the Greeks and is employed against the Persians in a manner a bit more martial. He is tasked with long swims and dives to gather information about Persian ships and to cut their cables while underwater. 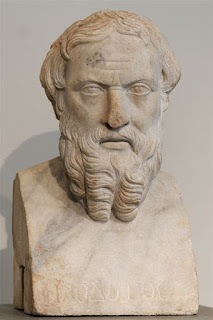 One must assume more than a little swimming, diving, and breath-holding prowess to accomplish any of these tasks. Add to that the stress of discovery or threat of death upon discovery and our mere ability to swim becomes a different animal.


Our early accounts do not provide specific information on the breath holding method, but we may surmise from the similarity of indigenous water cultures the world over that the method is mighty similar to the one that shakes out with modern free-divers.


·        The urge to take a breath is fired first by the build-up of CO2 in the bloodstream, the actual need for oxygen is the secondary driver.


·        Modern free-divers use the following method: Inhale for a 2 count, exhale for an 8-count then take a deep breath and commence your dive.


·        I have used this method myself to make 90 seconds easily and a bit beyond that with increasing discomfort as the seconds tick away.


This is an easy hack well within everyone’s ability.


But..consider this. The above method is for use in sponge-diving, sport, non-stressed recreational or vocational activities. Is this the same method that was or is used under duress?


US Navy Frogmen [precursors to the modern SEALs] circa. WWII era, took a slightly different approach, one that is anathema to the sport-approach.


·        The CO2 blow-off is cited as being the same driver to hack, but they approach the blow-off differently.


·        They recommend 10-17 rapid hyperventilating breaths [no more, no less] followed by a deep-inhalation taking the lungs to only ¾’s full.


·        As the break-point begins to approach, rather than give up immediately, begin letting out your breath slowly. This CO2 release eases the feeling of immediacy and prolongs breath holding time.


·        Using this method, I have likewise had easy extension to the 90 second mark and a bit beyond but…


Free-divers vehemently warn against using hyperventilation as it has proven inefficient and dangerous at depth—essentially our need to gasp may come sooner than with the relaxed 2-8 count ratio.


But consider this, there may be compelling reasons to the differences in approach.


The US Navy Frogman advice is only advocating breath holding to sailors and airmen who are: 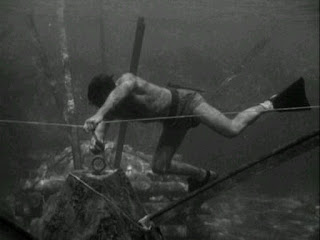 
TWO-Swimming beneath flaming oil slicks and other like dangerous post-shipwreck debris.


THREE-Stealth during river and stream crossings.


Notice that all three contingencies are stress-related endeavors. The warfare breath-holding method is likely canny wisdom for three-fold reasons.


ONE-Speed of use. When we see the strafing plane or other danger approach we may not have time to refer to the more leisurely 2-8 count ratio but can indeed fall back on the rapid 10-17 hyper-ventilating breaths.


TWO-The recreational/vocational method requires a calm operator. Conjuring calm in the midst of a car submerging beneath the waves after a bridge plunge might be a little out of the reach of most of us, whereas the hyperventilating may not be far from what we may naturally do.


THREE-The free-divers’ concerns are legitimate but, consider the uses of the warfare/danger evasion version. The warfare advice calls upon us to reflect on how far we are able to surface swim all out in 30-seconds. We are then to think of a like distance beneath the water with an extension to one minute in some cases.


In short, the recreational method is more about improving capacity for ever greater depths and duration, whereas the warfare method is about speed of use while under stress for short-duration sub-surface tasks.


Now, most of us will likely not be called upon to cut the cables from beneath Persian warships, or swim beneath masses of burning cargo, but for the snowball’s chance in hell that we may be called upon to escape or evade in an aquatic environment under stress, familiarity with both methods ahead of time [that means drilling and not mere reading] is the better part of wisdom.
[For more Old School training practices subscribe to this blog, the RAW Subscription Service and our upcoming book Rough & Tumble Conditioning.]