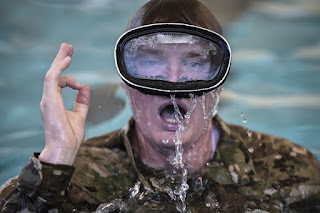 [This article is best consumed in series with the prior offerings regarding Aquatic Tactics.]


If we have developed the skill to swim, possess a reasonable breath-holding capacity [a comfortable one-minute is sufficient across many cultures], and have a willingness to work our aquatic tactics fully, the limiter at this point is often pain in the ears.


Many a good warrior feels limited or excluded from aquatic tactics because of ear trouble, but, again, a look to the wisdom of indigenous diving cultures and how they have coped with the malady is most instructive.


Along the way we will use a bit of science to interpret some of these tactics.


Ears & Submersion: Diving to depth is often accompanied by pain in the ears. This is due to the middle ear being an air-filled chamber that does not freely exchange air with the outer ear.


As we descend the air within the middle ear chamber contracts and exerts pressure on the eardrum which bows inward—this bowing inward results in discomfort, pain, and can lead to rupture.


To thwart this, we must equalize the middle ear pressure with that of the outer ear which is now at the pressure of the water-depth.


Equalizations are performed via allowing air into the middle ear along the Eustachian tubes—narrow passages that lead from the ear to the throat [pharynx to be nit-picky.]


The Eustachian tube usually is in a lapsed or collapsed state.


We are familiar with pressure equalization in our ears when at altitude we yawn to “pop our ears.” The “pop” we hear is the air being admitted through the tube as it expands from the collapsed state and equalizes the pressure of the middle ear to the outer ear.


If we have a cold, excess mucous can build-up in our Eustachian tubes blocking the passage. This blockage prevents equalization and it is not recommended to dive while so afflicted.


The middle ear is very sensitive to pressure change so it is wise to get in front of the need to make a pressure change. That is, before you even submerge do a quick pressure-test to see if you are able to “pop” while dry. The time to find out your Eustachian passage is blocked is not while submerged and already under pressure.


We need our wits about us when we are beneath the surface, all the more so if we are assuming an attack or evasion operation. 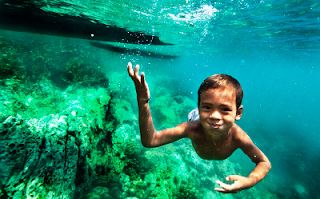 
“The Pinch & Blow” is exactly what it sounds like. You pinch the nostrils shut with one hand and give a short blow of air “up” through your throat into the Eustachian tubes. This method, commonly known as the Valsalva method to scuba divers, is quick and easy to learn.


The key here is to blow only with enough pressure to move the Eustachian tubes from the collapsed state. Violent or prolonged puffs of air can damage or even rupture the eardrum.


Take it easy and slow and this method should serve you well. Experimentation shows around a two-second puff with enough force to blow up a balloon does the trick.


“The Pinch & Swallow,” is, again, exactly what it sounds like. You pinch the nose closed and make a big swallow. The act of swallowing creates muscular tension in the throat and soft palate thusly “rearranging” the anatomy a bit opening up the Eustachian tubes. The natural lift of the tongue at the end of the swallow forces air into the opened Eustachian tubes.


This method is known in modern parlance as the Toynbee.


I highly recommend you give this one a go right now on dry land. Pinch your nose and give a big slow-motion swallow. Notice what the throat, soft palate, and tongue are doing. Being aware of these motions will come in handy for non-pinch methods to be covered in another section.


“The Vocal Pinch” or Frenzel method. Pinch the nose closed and make a hard “K” sound in the back of your throat. Your mouth will be closed obviously as you will be submerged, but dry-practice will give you a feel for the effect. 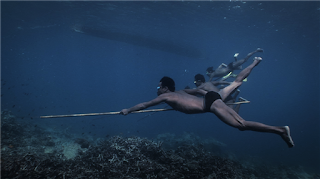 “The Push-Pinch & Swallow.” This method combines two of the prior methods, the Valsalva and Toynbee, and is known in modern diving circles as the Lowry method.


To perform, pinch the nose shut, push air towards the closed nostrils while swallowing at the same time.


Each of the four methods have been used by indigenous divers of the past and present and many have been adopted by modern scuba divers. The last one, the Push-Pinch & Swallow or Lowry is a bit trickier with a scuba regulator in one’s mouth, but free-divers are able to perform all of these equalizations with ease.


These methods are easy to learn, quick and effective but…how do we account for equalizations made by indigenous divers at depth who may have a fishing spear in one hand and a sea-harvesting basket in the other or a clutched surface-line? Let alone the horrible contingency of a sub-surface swim with hands shackled behind one’s back.


Without hands being free, how does one make the vital equalization?


Turns out there are few hands-free methods used by indigenous divers that we can adopt for our own uses.


We’ll cover those and how to wisely surface in the next in this series.