Attacking the “Buckler” from Heenan to Louis by Mark Hatmaker 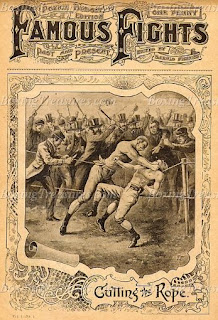 [This is excerpted from our upcoming book Boxing Like the Champs, Round Two. I have been asked to excise the 6-rounds of drilling but...wink...RAW Subscribers can find them on RAW 186. To join the RAW Crew or for more info have a look.]


While the weapon-hand went to work the buckler was used to deflect blows and at times used as a weapon itself.


OK, so what does a buckler have to do with boxing?


In the early days of the sport, boxing was thought of as an auxiliary activity to other forms of combat. Early boxing academies were not purely establishments for boxing training. They often offered a myriad of disciplines that were taught in tandem with one another.


There are numerous records of bouts where the participants not only boxed but also might engage in fencing, wrestling, and singlestick matches [essentially “sword-dueling” with a stout stick standing in for the sword itself.]


One of the anointed Fathers of Modern Boxing, James Figg, was an accomplished swordsman and engaged in many singlestick duels.


As part and parcel of swordfighting we often see buckler-tactics, offensive and defensive use of the buckler.


When the buckler was not in use the rear arm [the defensive arm] was still held in the buckler-ready position.


What is buckler-ready position? Assume your boxing stance. Now look at your rearward arm, with its bent elbow and fist “up” position. Congrats, you have now had your first sword and buckler lesson.


To distract, feint, or to open a line, swordsmen would often attack the buckler itself.


There was a transfer of this tactic from swordplay to the empty-handed boxing scufflers who knew that the occasional “attacking of the naked buckler” could have its uses.


There are myriad instances of attacking the buckler, but let’s look at a mere two.


One from the early era when swordplay, wrestling, and singlestick were also part of the boxing curriculum.


And one from the modern era to demonstrate that the tactic still has a good deal to recommend it. 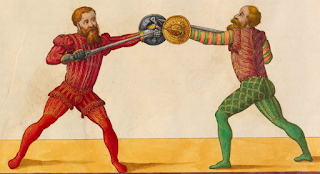 John Camel Heenan, the Benicia Boy, was an American prize-fighter who decided to cross the pond and take on the British champion, Tom Sayers.


The fight ended in absolute chaos when the crowd rushed the ring after Heenan tried to “strangle” Sayers by pushing his head down and across the ropes in the 37th round.


After this melee, the ring was set up a short distance away and the much battered and bruised warriors re-commenced for five more rounds before the police were spotted and the crowd dispersed. [Prizefighting being illegal at this time.]


Both men gave and recived a good deal of punishment, but contemporary reports have it that Sayers was looking superior with good defense when by either luck or design Heenan “attacked the buckler.”


Heenan having trouble penetrating Sayers defense launched heavy blows at the defense itself and in the 6th one of these did the trick rendering Sayers right arm quite useless. [Heenan’s eye was closed in the 7th and yet these men carried on for 42 rounds and over two hours of brutal punishment.]


So, here we have an instance of banging the arms [attacking the buckler] to gain advantage.


Joe Louis--yeah, Joe again, but when the well is deep, drink deep.


Joe is facing the very slick Lee Ramage for his first time. The two met for this inaugural bout in Chicago, December 10, 1934. Joe is having trouble penetrating Ramage’s tight defense.


He heads back to his corner after the sixth round and says, “I can’t get a good shot at him.”


To which, the ever-wise Jack Blackburn, replies, “Well, he’s got arms ain’t he?”


The canny Mr. Blackburn told the Brown Bomber to attack the buckler.


By the eighth round Ramage had trouble holding his arms up and Joe put him away.


SIX ROUNDS OF ATTACKING THE BUCKLER


With this minor change in targeting and the six preceding drills we can go a long way from seeing a shelled-up good defense to seeing everything [and I mean everything] as a target.