In prior articles in this series we have dealt exclusively with descending, preparing to descend, and how to manage comfortably while at depth. Now, let’s talk ascents as there are some dangers here as well, but, again, a marriage of science and indigenous diving wisdom renders these dangers negligible.


As we have discussed, when the human body descends to even shallow depths we experience great pressure changes, so great that even if we had a snorkel one meter long we would lack the muscular ability to intake a breath of air to survive.


At a depth of 10 meters [approximately 30 feet] we are already experiencing twice the pressure at the surface. The pressure at even greater depths is so extreme that deep sea fish brought to the surface often evert their viscera as the gas in their swim bladders expands and forces their guts out though their mouths.


Now, we are not deep-sea animals and seldom traipse along at such depths without extreme mechanical measures, but can we be subject to the same or similar dangers in shallow depths?

Let’s go back to that depth of 30 feet. If we were to take in a full lungful of air and then ascend without releasing any of that volume the air would expand and burst the lungs.


Even if we wisely do not surface with full lung-expansion we cannot assume a smaller volume is safe, we can still be subject to the dangers of the pressure change.


Even at partially filled capacity the lung-expansion as exterior pressure decreases on ascent can cause rupture of the air-sacs in the lungs allowing gases into the pleural cavity surrounding the lungs.


Even if the gases do not escape into the pleural cavity they can escape directly into the bloodstream where gravity, being gravity, will allow the lighter than blood-volume gases to rise through the throat into the cranium where the effect can be arterial blockage, i.e., an embolism, and often fatal.


A fully inflated lung and a quick ascent can burst that lung from a depth of only 2 meters.


We can damage our lungs at a depth of a mere six feet.


Seldom do we fully inflate lungs before a dive, thus the wisdom of the ¾’s inflation advice in a prior article in this series.


And…indigenous divers naturally blow off gas as they ascend. This gradual trickling of air from the lungs even from great depths coupled with ascents made with speed allows the human being to ascend with safety.


In short, breathe out continually on the way up and you’re good to go.


Some indigenous peoples use a dry-land drill to both train lengthening breath-holding time and to inculcate ascending gas release. We can think of this as a form of “walking apnea.”


·        Use one of the two breath-holding methods described in the earlier section. 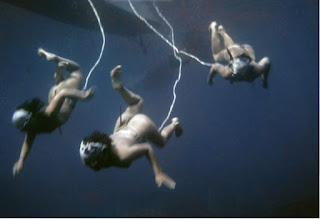 ·        At about the halfway point of your breath-holding ability, turn around and walk at the same pace back to your starting point.


·        On your return walk, slowly release the air in your lungs throughout.


By working this drill, you train your ability at breath-retention while in movement and not the usual artificial static-hold.


You also begin to learn your true make-or-break halfway point. If you take your breath before you return to your starting point, well, that is valuable feedback—you’re not ready for greater depth.


And you begin from the onset putting into practice the wisdom of gas release for safe ascent.


If you add any of the pressure-equalization tactics to the “walk-out” portion of the drill you will then have a very nice dry-land tactical drill-set ready to be worked before you even hit the water.
.