The Theory of "The Mountain Code" by Mark Hatmaker Jim Webb, in his history Born Fighting: How the Scots-Irish Shaped America offers an interesting [if unprovable] premise on the foundations of the clannish honor, rebelliousness, and ornery combativeness of the people of early Appalachia and the Ozarks. It is a book well-worth reading and discussing [another day, perhaps.]


If we accept Webb’s premise there is much explanatory power behind why we had so many rough and ready folks willing to risk all for westward expansion. I’m hard-pressed to find other cogent explanations for “what happened after.” By that I mean, if we look to those around us today, can we easily imagine a large number of people uprooting and risking life, limb, property, and fellow family members to head off into uncharted and known dangers? It’s hard enough to get people off their phones and out of the house for a day-hike, how much more so to hack out the Wilderness Road, hit the Oregon Trail, float a rickety flatboat down the Missouri all with the high probability of unfriendly folk met along the way.

I find that you can see Webb's theme encapsulated in a few brief paragraphs in a work of fiction, the below is from Forrest Carter's The Vengeance Trail of Josey Wales. [BTW-A mighty fine book itself.]

“The [Mountain] Code was as necessary to survival on the lean soil of mountains, as it had been on the rock ground of Scotland and Wales. Clannish people. Outside governments erected by people of kindlier land, of wealth, of power, made no allowance for the scrabbler. 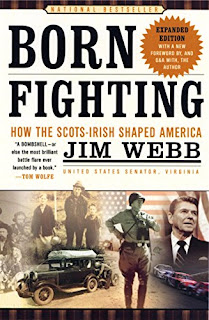 “As a man had no coin, his coin was his word. His loyalty, his bond. He was the rebel of establishment, born in this environment. To injure one to whom he was obliged was personal; more, it was blasphemy. The Code, a religion without catechism, having no chronicler of words to explain or to offer apologia.

“Bone-deep feuds were the result. War to the knife. Seldom if ever over land, or money, or possessions. But injury to the Code meant---WAR!

“Marrowed in the bone, singing in the blood, the Code was brought to the mountains of Virginia and Tennessee and the Ozarks of Missouri. Instantaneously it could change a shy farm boy into a vicious killer, like a sailing hawk, quartering its wings in the death dive.

“It all was puzzling to those who lived within government cut from cloth to fit their comfort. Only those forced outside the pale could understand. The Indian—Cherokee, Comanche, Apache. The Jew.


“The unspoken nature of Josey Wales was the clannish code. No common interest of business, politics, land or profit bound his people to him. It was unseen and therefore stronger than any of these. Rooted in human beings’ most powerful urge—preservation. The unyielding, binding thong was loyalty. The trigger was obligation.”


[For Old School training practices subscribe to this blog, the RAW Subscription Service and our upcoming book Rough & Tumble Conditioning.]