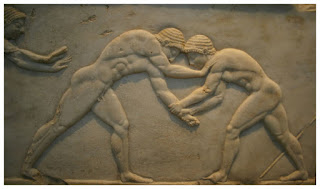 Pankration, or sometimes pancratium, the Ancient-Hellene version of 21st-century MMA is often touted [rightly] as a forerunner of a sport so many of us enjoy today. Careful studies of the past can allow us to glean wisdom, both tactical and strategical, to be applied to our own game in the present.


It has been said many times, and in many versions, that there is nothing new under the sun, or that often our “newest discoveries” are but re-discoveries.


Or as two ancient texts would present an idea that was already ancient at the time of their writing:


“Truly it has been said that there is nothing new under the sun, for knowledge is revealed and is submerged again, even as a nation rises and falls.”-Paracelsus


But…if we are to learn from the past it is wise to make sure we are certain of our sources. And the word “certain” is spot on as it is derived from the Old French meaning “determined or fixed” and that is in turn derived from the Latin for “determined, resolved, fixed, or settled.”


To make certain is to ensure that we haven’t made “true” that which is not necessarily true at all. We must be “certain” that that which we have made “fixed” is not in error. For if so, we may be making a bearing on a “fixed” course that will lead us far from the truth.


Today’s combat case in point, the very nature of the ancient pancration.


Take a gander at this characterization of the sport.


“In the pankration the competitors fought with every part of their body, with their hands, feet, elbows, knees, their necks, and their heads; in Sparta they even used their feet. The pankratiasts were allowed to gouge one another’s eyes out…they were also allowed to trip one another’s opponents, lay hold of their feet, nose, and ears, dislocate their fingers and arms and apply strangleholds. If one man succeeded in throwing the other, he was entitled to sit on him and beat him about the head, face, and ears; he could also kick him and trample on him. It goes without saying that the contestants in this brutal contest sometimes recived the most fearful wounds, and not infrequently men were killed.” 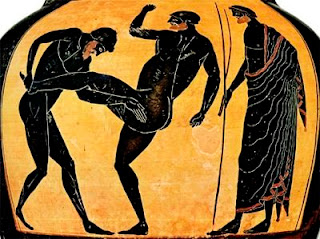 
A story we have often heard.


But…according to many renowned historians and those truly knowledgeable in the field of translating ancient transcripts the above is “almost completely wrong.”


That “almost completely wrong” quote is from Professor Waldo E. Sweet, and it is seconded by Professor Erich Segal and many others.


And yet, this often deadly no-holds-barred story is, more often than not, the one that is told.


Now, where did this idea come from?


The above passage is from a work titled Gerschihte der Olympischen Spiele [History of the Olympic Games] written by Franz Mezo.


The passage is in a book that won a contest called “Epic Works” that was sponsored by the ninth Olympiad in 1928. [This prize-winner found a publisher in 1930.]


It receiving the award allowed it to be given a bit of historical heft and passages were picked up and repeated in work after work, among them, Ludwig Drees’ 1968 book Olympia: Gods, Artists, and Athletes.


If you read both of these works one is left with the assumption that you are smarter for navigating their historical waters.


But again, better scholars, more adroit translators assure us that what Herr Mezo began and what has been subsequently repeated by Mr. Drees and others, is a poor translation and interpretation of the ancient story of Arrichion. 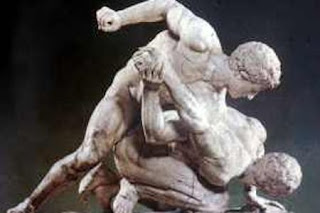 This repetition of Olympic Committee-approved poor information is a combat-specific sort of “fake news.” It disorients not only the real history of pankration but can lead some to interpret better sources in a skewed way as they seek to jibe truthful sources with the poorly interpreted sources.


Imagine if the late senator John McCain’s interpretation of the early Ultimate Fighting Championship as “human cockfights” and his attempts to ban it were the prevailing narrative. This wrongheaded interpretation would be the prism through which all other information on the subject would be shot through.


It is the better part of martial scholarship, whether it be mere academic or with an eye on application, to strive for veracity in all things, eschew legend, and check your sources then check them again.


We can save ourselves a lot of time [training and otherwise] by not going down the rabbit-hole of poor scholarship and holding to a muddleheaded idea simply because we like how the narrative sounds, or it makes us feel “cool” to be associated with a given interpretation of “truth.”


[For historical tactical and strategical methods as truthful as I canmanage see this blog and the RAW Subscription Service.]