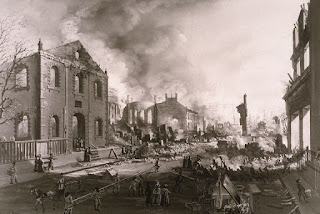 Firefighting is a dangerous job—no doubt about it. But with the advent of better safety equipment and better and safer structure design, thankfully, the dangers of the job become less with each decade.


The undoubtedly dangerous job has benefited so much from such safety measures that it has not appeared on The Top Ten Most Dangerous Jobs list for decades.


That is a mighty good thing.


To be clear, firefighting IS dangerous, but statistically speaking we have made great gains here. If you are on the personal side of one of those statistics then no list in the world will change the perceived danger, nor should it, vigilance is key in all risky endeavors.


Let’s turn back the clock to early America when practically all dwellings were made of wood, patched with pitch, lit with open flames or rickety vessels of coal oil.


Let’s add cigarettes and cigars and pipes and a lucifer [striking match] in most every hand.


Let’s add open flames being the primary source of warmth and illumination.


With all of these additions I think we might see just how dangerous early incarnations of the firefighting job were.


Now, what if we were to take a mighty dangerous profession and add the likelihood of being stomped, stabbed, beaten or maimed at each fire alarm you were called on?


Yeah, we take a risky job and add violent assault and the game gets stupidly dangerous and wild.


Let’s get to the question that the curious among you have already asked yourselves: “Why the hell are firefighters getting assaulted? Who was doing such a heinous thing?”


Let’s answer the second one first. Who was doing the assaulting?


Let’s have a look at the why. 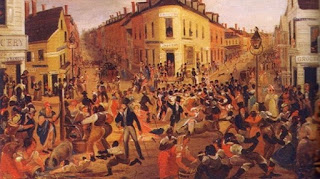 In the early days of the firefighting game the “fire departments” were, shall we say, competitive. They earned according to number of fires doused. This quota incentive led to a few nefarious practices, among them a bit of salary-yearning acts of arson.


And…hell and high-water races to get to the scene of a fire.


Rival departments used the schoolyard “I was here first!” rule to earn fire-money.


With that in mind, the fastest musters [assemblage of men and gear] who could get there first was at a premium.


In a game where speed counts, fire musters became faster and faster. Speedy fire musters are still used today in the profession and in competitive firemen games.


What was different then, was that as each department gained speed and fire-money being on the line, brawls at the scene of the fire to be the first to get the pumps going and earn the prize became a bit of a usual thing. Scuffles to pull the other team off of their pump started turning into wholesale warfare.


Recruiting for fire departments became less about those with altruistic fire-dousing souls and more about adding brawlers, bruisers, and rough and tumblers who could secure the fire-money prize.


In New York in the 1830s the Old Maid [Number 15] Engine Company had on their rosters such noted brawlers as Johnny McCleester, the Chanfrau brothers, and San Banta a friend and protégé of early pugilist Yankee Sullivan. [San Banta was present in San Francisco when Sullivan was lynched by vigilantes—more on that another day.]


Over at Number 40, the Lady Washington Engine Company, they had Old Mose himself the leader of the brutal Bowery B’hoys gang, Big Jim Jeroloman a 6’ 4” shipbuilder and pugilist, and a gent known as Orange County who hobbed his boots with protruding nails for better stomping. 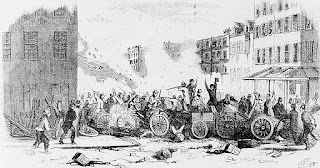 Big Jim Jeroloman, in spite of his size, strength, and fistic prowess, was a notorious biter, he often complained that he could never go far in the professional fight game as he could not resist the temptation to bite. He was so adept at this game he makes Mike Tyson look finicky. Most Big Jim opponents left with at least a half-dozen bitemarks along their neck and shoulders.


The fireside brawls were chockful of swinging fists, booted kicks, stomps galore, and lots and lots of windpipe punches.


This was not merely a New York “thing”, historian Amy Greenberg in Cause for Alarm: The Volunteer Fire Department in the 19th-Century, has dutifully noted similar brawling in St. Louis, San Francisco, Baltimore, Boston and other cities.


We’ll dig a bit deeper into more of this early lore another day, but in the meantime, we can be thankful that when we see a fire engine racing to do some good that we never once have the thought “I bet someone is getting stomped tonight.”