How to Bet on a Cat Fight by Mark Hatmaker 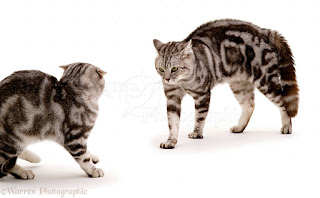 If one is serious about conflict and combat studies, it is instructive to open the examination to other species. Such studies allow us to see the myriad similarities in aggression, stand-down tactics, flight behavior, et cetera and allow them to inform our own game.


We humans often get a bit “theory-blind” and fail to see the biological laws before our eyes that will corrode misplaced tactical theory like rust through formerly thought impervious iron.


Such interspecies observations can make us better at our own game, or at the very least knock us off of our “human high-horse” so to speak.


Today, let’s have a look at our feline friends and what they have to teach us about ourselves.


Anatomy of a Cat Fight


·        The dominant cat or Aggressor will begin a stretch-legged “tall walking stalk” to appear larger.


·        The Aggressor Cat will display ears rotated, the backs are facing forward. To fully flatten the ears, they must be rotated thusly but the not moving to full flattened signals “I’m ready for some shit but I don’t worry about you bitch.” They will go to flat once the attack is initiated but the back facing forward as opposed to full-flat is the cat to give wide berth.


·        The Aggressor will erect hairs along its back to increase the size signal, these hairs rise towards the tail and give the appearance of the cat being larger towards the back, which is the opposite of the submissive or defensive cat which will adopt a rear-end low to the ground posture.


·        Within about one-yard distance in the approach, the Aggressor cat will begin an intention movement with the head. It will slowly twist its head to one side while keeping eyes locked on the prey. As it moves closer it may do more than a few of these head-revolving motions. 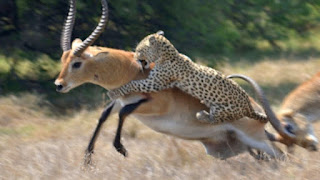 ·        All cats [domestic, lions and tigers, etc.] often kill with a bite to the neck, it is not a throat ripper so much as either a sometimes neck-snapper in lower-weight encounters [cat versus rodent or tiger versus Vegas magician] but more often a jugulation. Cat’s when matched in weight are often “choking out” their opponents with the ‘bite’ it is for this reason that in Brazilian Jiu-Jitsu the choke is called “mata leao” or “lion-killer.”


·        These intention signals are the human equivalent of feinting with the jab or faking the take down. The aggressor cat is feinting for position to get to the throat-bite.


·        This phase can go on for some time accompanied by yowls and the well-named caterwauling, an equivalent of human trash-talking.


·        The closer the cats approach one another the slower and smaller the motions become. Again, the human analog is here, large feints in the outside range, smaller as the range closes. 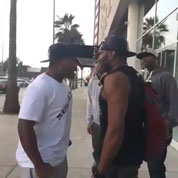 ·        If the fight is to be disengaged, the Submissive animal moves slowly out of range as if to say, “Yeah, I would do this but not today, I got more important shit to do today than fuck you up, but any other time…” Again, so so similar to human interaction—Aggressors and Submissives wanting to “save face.”


·        If the battle is serious, they will “close” that is move to grappling/throat-biting range where twisting and turning jockeying for throat position while protecting their own throat is paramount in this battle for neck access.


·        If the battle is of lesser stakes, the bite may be foregone for “paw scrapping” that is, essentially, boxing for a few swipes with the forepaws to settle the feline beef. Again, notice the human correlate, the few clumsy punches thrown by the “not really willing” and the balls-to-the-wall closing of range by the dead-serious.


[For more such obseervations see this blog, and for pragmatic applications of old school tactics historically accurate and viciously verified see our RAW Subscription Service.]


For more such obseervations see this blog, and for pragmatic applications of old school tactics historically accurate and viciously verified see our RAW Subscription Service.]